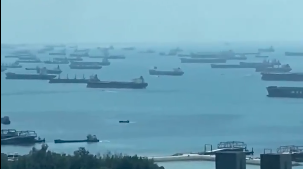 Is the global economy about to crash?

Impossible to Predict What Direction Coronavirus Epidemic Will Take: WHO Chief

“And most of all, we are concerned about the potential havoc this virus could wreak in countries with weaker health systems.”

Current statistics from Chinese authorities indicate that 90 to 100 percent of patients requiring hospitalization need supplemental oxygen, Dr. Mike Ryan, the WHO’s emergencies program director, told reporters in Geneva earlier this week. Of those, up to a quarter need intensive care and 5 to 10 percent may require some form of mechanical ventilation.
…

One of the patients, a surgeon, works at a hospital in Wakayama Prefecture where another doctor tested positive earlier, officials said. His wife and a patient at the hospital also tested positive.

The others are in Tokyo; seven of them were in close contact with a taxi driver who tested positive for the virus. They were found when authorities began investigating the driver’s contacts.