The Israeli-Iranian project, code-named ‘‘Flower,’’ was one of six oil-for-arms contracts signed in April 1977 in Teheran by Shah Mohammed Riza Pahlevi and Shimon Peres, then the Israeli Defence Minister. 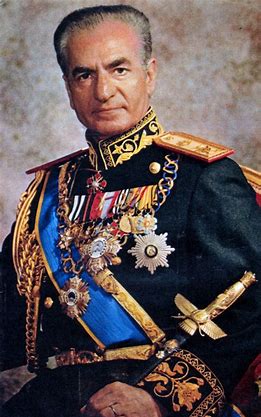 According to the documents, a missile was test-fired in Israel in the presence of an Iranian general. The aim of the project was to extend the range of an Israeli missile developed in the early 1970’s and replace American-supplied parts so that Israel could legally export it without American approval.

Israel was still perfecting the missile when Ayatollah Ruhollah Khomeini came to power in February 1979 and halted cooperation with Israel.

Two Iranian officials involved, Gen. Hassan Toufanian, the arms procurer, and Adm. Kamal Habibollahi, the navy commander, said in interviews that the conversations recorded in the documents were genuine. The two now live in the United States.
https://www.nytimes.com/1986/04/01/world/documents-detail-israeli-missile-deal-with-the-shah.html

In the summer of 1953, the CIA and Britain’s MI6 arranged a coup in Tehran. Mossadegh was successfully overthrown and spent the rest of his life on his country estate under house arrest, and Iran remained a staunch Cold War ally of the West. After more than 20 years of the Shah’s rule, there was a bloody revolution in 1979 and brought into power an Islamic republic, which has ruled ever since.
former New York Times foreign correspondent Stephen Kinzer, author of All the Shah’s Men: An American Coup and the Roots of Middle East Terror.

Stephen Kinzer on US-Iranian Relations, the 1953 CIA Coup in Iran and the...

As Iranian President Mahmoud Ahmadinejad visits Iraq for a historic meeting with Iraqi leaders, we turn to former New York Times foreign correspondent Stephen Kinzer, author of All the Shah’s Men: An American Coup and the Roots of Middle East Terror....

All the Shah’s Men: An American Coup and the Roots of Middle East Terror is a book written by American journalist Stephen Kinzer. The book discusses the 1953 Iranian coup d’état backed by the U.S. Central Intelligence Agency (CIA) in which Mohammed Mossadegh, Iran’s prime minister, was overthrown by Islamists supported by American and British agents (chief among them Kermit Roosevelt) and royalists loyal to Shah Mohammad Reza Pahlavi.
Fra Wikipedia

Fra Wayback Machine :
One reason I was so interested in writing this book is that I have always asked myself, how do you go about overthrowing a government? What do you do? Suppose that you are sent to a country with that mission. What do you do on the first day? How do you start and then what do you do?

Well, now I know. Kermit Roosevelt set about trying to create chaos in Iran. He was able to do that very quickly by a series of means. The first thing he did was, he started bribing members of parliament and leaders of small political parties that were a part of Mossadegh 's political coalition. Pretty soon the public started to see the Mossadegh ’s coalition splitting apart and people denouncing him on the floor of parliament.

The next thing Roosevelt did was start bribing newspaper editors, owners and columnists and reporters. Within a couple of weeks, he had 80% of the newspapers in Tehran on his payroll and they were grinding out every kind of lie attacking Mossadegh . The next thing Roosevelt did was start bribing religious leaders. Soon, at Friday prayers, the Mullahs were denouncing Mossadegh as an atheist enemy of Islam. Roosevelt also bribed members of police units and low-ranking military officers to be ready with their units on the crucial day. In what I think was really his master stroke, he hired the leaders of a bunch of street gangs in Tehran, and he used them to help create the impression that the rule of law had totally disintegrated in Iran. He actually at one point hired a gang to run through the streets of Tehran, beating up any pedestrian they found, breaking shop windows, firing their guns into mosques, and yelling – “We love Mossadegh and communism.”

This would naturally turn any decent citizen against him. He didn’t stop there. He tired a second mob to attack the first mob, to give people the impression that there was no police presence and order had completely disintegrated. So, within just a few weeks, this one agent operating with a large sum of cash and a network of contacts and various elements of society, had taken what was a fairly stable country and thrown it into complete upheaval.

Overthrow of Prime Minister Mohammad Mosaddegh The 1953 Iranian coup d'état, known in Iran as the 28 Mordad coup d'état (Persian: کودتای ۲۸ مرداد‎), was the overthrow of the democratically elected Prime Minister Mohammad Mosaddegh in favour of strengthening the monarchical rule of Mohammad Reza Pahlavi on 19 August 1953, orchestrated by the United States (under the name TPAJAX Project or "Operation Ajax") and the United Kingdom (under the name "Operation Boot"). It was the first covert action ... The Great Satan (Persian: شيطان بزرگ‎; Shaytân-e Bozorg) is a demonizing epithet for the United States of America in Iranian foreign policy statements. Occasionally, these words have also been used toward the government of the United Kingdom. The term was originally[citation needed] used by Iranian leader Ruhollah Khomeini in his speech on November 5, 1979 to describe the United States, which he accused of imperialism and the sponsoring of corruption throughout the world. The speech occurred one...

In October 2005, Neturei Karta leader Rabbi Yisroel Dovid Weiss issued a statement criticising Jewish attacks on Iranian President Mahmoud Ahmadinejad. Weiss wrote that Ahmadinejad's statements were not "indicative of anti-Jewish sentiments", but rather, "a yearning for a better, more peaceful world", and "re-stating the beliefs and statements of Ayatollah Khomeini, who always emphasized and practiced the respect and protection of Jews and Judaism." In March 2006, several members of a Neturei Ka...